Gianluigi Colalucci (Roma 1929-2021): “in memoriam”. One of the best restaurateus in the world

He was director of the conservation and restoration laboratories at the Vatican. From 1980 to 1994 he was in charge of the restoration of the Sistine Chapel in Rome. He participated in the Congreso Internacional de Historia de la Pintura de Época Moderna. De Miguel Ángel a Goya, held at the Universitat de Lleida in 2013. He has been an active Scientific Consultant of the CAEM (2013-2021). 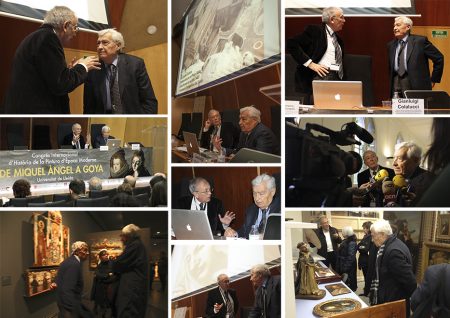 The highlight of his professional career as a conservator and restorer was his work in the Sistine Chapel, where he achieved a non-invasive recovery of Michelangelo Buonarrotti’s original polychromy. After 500 years, more than 1.200 square metres of mural painting were brought back to life, after rescuing the paint that had been buried by layers of soot and dust accumulated over time; in addition, Colalucci, with the help of Maurizio Rossi and Piergiorgio Bonetti, managed to remove with great care and precision a pernicious animal glue applied three hundred years ago to fix the colours.

In addition to the great work mentioned above, his many other works in the field of panel and canvas painting can be seen in the doctoral thesis written by his wife, Daniela Bartoletti, and defended at the Polytechnic University of Valencia on 22 February 2010. Professor Ximo Company, director of the CAEM, was on the examining board that judged this splendid thesis with the highest mark. The title of the thesis already says a lot: Gianluigi Colalucci y su trayectoria restauradora. Un viaje a través de las transformaciones en el mundo de la restauración desde Cesare Brandi a nuestros días (2010). Daniela Bartoletti also honours us as Scientific Consultant of CAEM, Universitat de Lleida.

Since 2013 he has been Scientific Consultant of the CAEM (UdL), and has always been distinguished by his cordiality and his solicitous attention to all our scientific requests and queries. The entire CAEM research team remembers him with admiration and gratitude.

Previous Post Ferran Bono, editor of El País, presents the artwork of El Greco attributed by CAEM Next Post Critical review by Ximo Company and Marc Borrás of the book Disegni spagnoli e italiani del Cinquecento della Biblioteca Nacional de España, Roma, 2020, with texts and edition by Benito Navarrete Prieto and Gonzalo Redín Michaus
You must be logged in to post a comment.
Menu
We use cookies to ensure that we give you the best experience on our website. If you continue to use this site we will assume that you are happy with it.Ok