This is one of the best and most highly valued United States painters of the 19th century, which underlines the exceptional value of this piece in Spain. 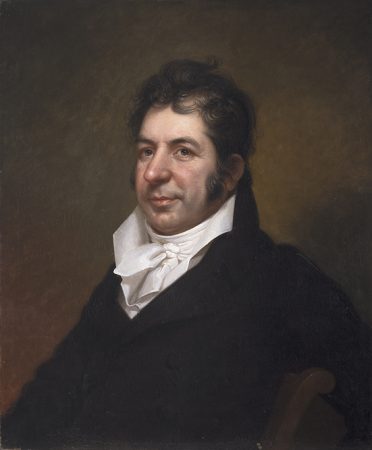 The CAEM has been studying during months this portentous portrait from a Spanish collection, the portrayed of which it has not been possible to identify, at least for the moment. Even so, the finesse of its execution and the high quality of its flesh tones and the precision of the whites indicated that we were dealing with the work of a great painter.

All these elements are typical of the great American painter Rembrandt Peale, to whom the CAEM, after a laborious process of research, attributes this canvas. The back of the canvas also has a series of allusions to prints, which refer to its English manufacture, as the linen fabrics were marked with the crown seal, the supplier’s seal and a series of alphanumeric characters. All this, together with the neoclassical clothing of the portrayed gentleman, suggests that the piece was made in England, probably during Peale’s trip to England in 1834.

Throughout his career he produced a large number of works, particularly portraits such as the present one, among which the ones he painted of Presidents George Washington and Thomas Jefferson stand out for the importance of the figures depicted; Peale’s best works are considered to be those executed between 1810 and 1830, as they reveal his ability to capture the essence of the portrayed, even those with strong characters. During these three decades his naturalistic and classicist style was synthesised in accordance with both English and American models, sometimes with a certain preference for one school over the other, although the influence of the great Jacques-Louis David never entirely disappeared.

Previous Post A new Morales comes to light Next Post CAEM team discovers a previously unpublished drawing by Francisco de Goya
You must be logged in to post a comment.
Menu
We use cookies to ensure that we give you the best experience on our website. If you continue to use this site we will assume that you are happy with it.Ok